Scott Goodwill reviewed the evolution of solar energy projects in New York State. He stated the traditional project was developing a solar system for one (1) building. That building would use all the power generated from the solar system. Scott Goodwill stated the next phase of solar projects was net metering. This involved multiple buildings being serviced by singular solar system. Excess energy generated that was not consumed by these buildings would be dumped back into the grid. Scott Goodwill stated the most recent development in the solar business is called Community Net Metering. This arrangement was just approved by the New York State Public Service Commission six (6) months ago. He stated it’s the newest concept in solar energy. Under this arrangement, solar power is generated and then billed out to as many end users as you can get. Power can be generated in blocks of 2 megawatt. A single project cannot exceed 2 megawatt. However, three (3) 2 megawatt projects would be developed on a singular site. Scott Goodwill reviewed a handout he provided to IDA members. He referenced pages referred to as “shared renewable” as being the same as “community net metering.”

Scott Goodwill suggested that the IDA could develop a solar project on the 62+/- acres it owns on the west side of the Tryon site in the Town of Johnstown. He stated the key would be to try and lease the property to a solar developer to generate a revenue for the IDA. Jim Mraz stated that this was the concept he had discussed with the IDA Board. He stated that those 60 acres in the back do not have good access and probably will never be developed as a shovel-ready site. A question was “Could a solar array be installed and have power from that array provided to a business that would locate in the Park?” He said if this was possible, having this solar array available to offer to a business could be an incentive that could attract a company to the Park.

There was a general discussion on whether power generated from a solar array here would be able to be utilized by just a business in the Park or businesses elsewhere in Fulton County. Jim Mraz stated that this would be a function of what the overall capacity would be of a solar array at this location. Scott Goodwill agreed. He estimated that four (4) to six (6) megawatts of power could conceivably be generated by a solar array at this site. He stressed that this was just an estimate and is not based upon any formal calculations. Jim Mraz stated developing this potential overall capacity would be important to determine how many businesses a solar array at Tryon could be serviced.

Dave D’Amore suggested that C.T. Male develop a proposal to do some feasibility analyses on a solar array. Scott Goodwill stated that C.T. Male would be happy to do so. Jim Mraz recommended that Scott Goodwill prepare a scope of services and forward it to him. He would work with Scott to finalize a scope of work. Once the scope was finalized, C.T. Male could then prepare a formal cost proposal to submit to the IDA.

Jim Mraz reviewed the information on the Agenda. He asked IDA Board members if they had any questions. There were none.

MOTION: To authorize the Chairman to execute the NBRC Grant Agreement and for the IDA to provide the local share of $65,847.

Jim Mraz reviewed the information on the Agenda. He said once Logos for Tryon are drafted, he would send them to IDA members for input.

Jim Mraz reviewed the Draft Design Standards that were distributed to all IDA members present. He stated this version was amended from the version reviewed at the last IDA meeting. He stated the Standards have been simplified and condensed. He thanked Dave D’Amore for the input he provided in developing these Standards. Dave D’Amore stated that the Standards, as prepared, present a clear statement of the IDA’s intent for the Tryon Technology Park. He stated the standards also provide companies with flexibility in how they want to design their projects. He stated that the standards would give the IDA the authority to review how all projects proposed for the Tryon Technology Park will be designed and constructed. Jim Mraz asked if there were any further questions. There were none.

MOTION: To approve the Design Standards for the Tryon Technology Park as presented.

Jim Mraz reviewed the information on the Agenda. He stated authorization is needed to pay the $200 fee to Ferguson & Foss for preparing the revised survey map for the parcel ESHS will be purchasing from the IDA.

MOTION: To authorize a payment of $200 to Ferguson & Foss Surveyors.

Jim Mraz reviewed the information on the Agenda. He stated the IDA did not receive any written comments from property owners in the Park. He stated that no property owner was present at today’s meeting to offer comments to the IDA Board about the proposed changes to the Park Covenants. Jim Mraz asked if there were any further questions on the proposed changes to the Park Covenants for the Johnstown Industrial Park. There were none.

MOTION: To approve the proposed Amendments to the Park Covenants for the Johnstown Industrial Park and to file those Amendments with the County Clerk’s Office. 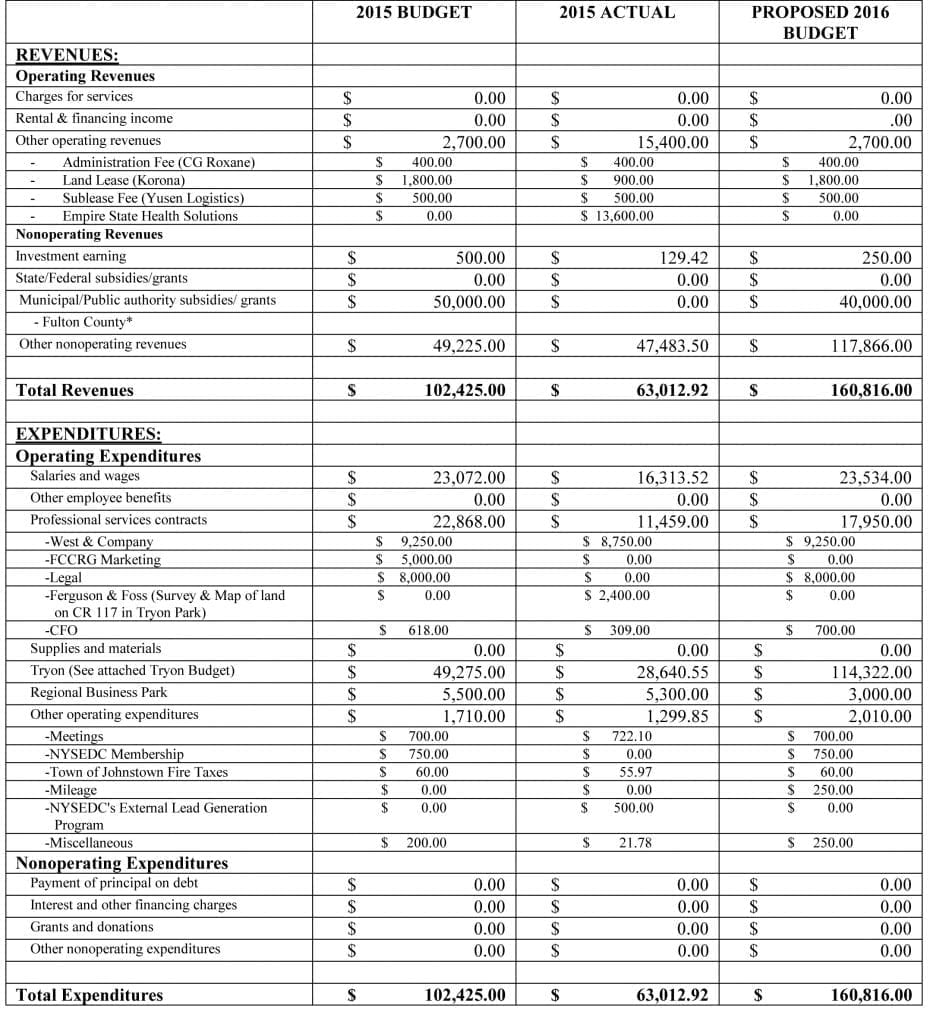 IDA members reviewed and discussed the revenues and expenditures proposed for 2016.

After further reviewing both the revenues and expenditures in the proposed 2016 Budget, Jim Mraz asked if there were any other questions. There were none.

MOTION: To approve the 2016 IDA Budget as presented.

2. What is a Regional Economic Development Brand:

2. What is a Regional Economic Development Brand: