Jim Mraz reviewed the information on the Agenda. He stated that he presented the two (2) options to the ED & E Committee that the IDA Board had been discussing.

He stated Committee members felt that trying this approach for a year or so would be the better way to go. At the end that time period, an evaluation could be done to determine where to go at that time. Tim Munn stated he understood the Committee’s thinking. He asked how many commercial real estate brokers there are in the Capital District region.

Jim Mraz stated approximately 12. Joe Semione stated that he feels it’s important to maintain the IDA’s partnership with Fulton County. There was a general discussion about the process that would be utilized if the IDA chose to ask all brokers in the region to bring projects to the IDA for Tryon.

Jim Mraz stated that the ED & E Committee recommended that a higher commission be paid to a broker if they bring a project to the IDA within say a 1 year period of time. Dave D’Amore asked what would happen if a broker brought a project to the IDA within the year time limit, but the project did not close until after the 1-year period. Jim Mraz stated this would have to be addressed in the prospectus.

Joe Semione asked what Ron Peters’ position was on this matter. Jim Mraz stated Ron would prefer to see the IDA send out information to all brokers.
Jim Mraz distributed copies of an e-mail he received from Berkshire Hathaway with information about retaining an exclusive broker.

Jim Mraz stated that there is a need to have an appraisal done on Building 3. He stated that if the IDA is going to ask brokers to sell Building 3, the IDA will have to establish an asking price for that building. He stated this would be best determined by having a commercial real estate appraisal performed. He requested permission from the IDA Board to seek quotes on having a commercial real estate appraisal done on Building 3.

Todd Rulison stated that if the IDA Board is going to send prospectuses to all real estate brokers, it should include sending them to brokers located west of Fulton County and not just the Capital District.

MOTION: To accept the recommendation from the ED & E Committee to send Tryon prospectuses to all commercial real estate brokers and to have the Executive Director bring a draft prospectus back to the IDA Board at the next meeting to review.

MOTION: To authorize the Executive Director to obtain quotes from commercial real estate appraisers to prepare a professional appraisal on Building 3 at Tryon.

2. Engineering Evaluation of F-Wing of Building 3:

Jim Mraz reviewed the information on the Agenda regarding the roof leak in the F-Wing. He asked if there were any questions. Dave D’Amore asked if Jim Mraz was pleased with the work Correll has done previously at Tryon. Jim Mraz stated, “Yes.”

b. Latest Feedback from National Grid:

Jim Mraz reviewed the information on the Agenda. He stated that National Grid has asked for additional surveying work be done so its planners can visualize the location of lot lines in the Tryon Technology Park. In addition, Jim Mraz reviewed a proposed change to the Site Plan for Tryon. He stated that the one (1) lot immediately to the west of the road accessing Building 3 will now be subdivided into two (2) smaller lots.

The current lot is approximately 17 acres. That will be broken into two (2) 8.5+/- acre lots. He stated this will be done to create two (2) smaller lots that could be used to locate smaller buildings. He stated at present there are no smaller lots at Tryon to accommodate a potential smaller project. The creation of these two (2) lots would create opportunities for two (2) smaller projects to potentially be located at Tryon.

MOTION: To authorize Ferguson & Foss to complete the additional survey work at Tryon being required by National Grid at a cost not to exceed $1,000.

Jim Mraz asked Kara Lais to explain the difference between the proposed lease/leaseback arrangement and prior project structures the IDA utilized. Kara Lais explained that, historically, the IDA had properties deeded over to them and then the IDA leased them back to the companies.

This was done to allow the IDA to extend IDA benefits to a project. She stated that there was a case recently where an IDA was sued because it had owned a property. She stated that best practices have been updated to now recommend IDA’s use the structure proposed for the Johnstown Renewables Project.

Under this structure, Johnstown Renewables will retain ownership of the project. The IDA will have no ownership interest in this project. They will lease it to the IDA who will lease it back to Johnstown Renewables. She stated this approach reduces the IDA’s potential liability. She stated it also will help terminate a lease in the event of a default. 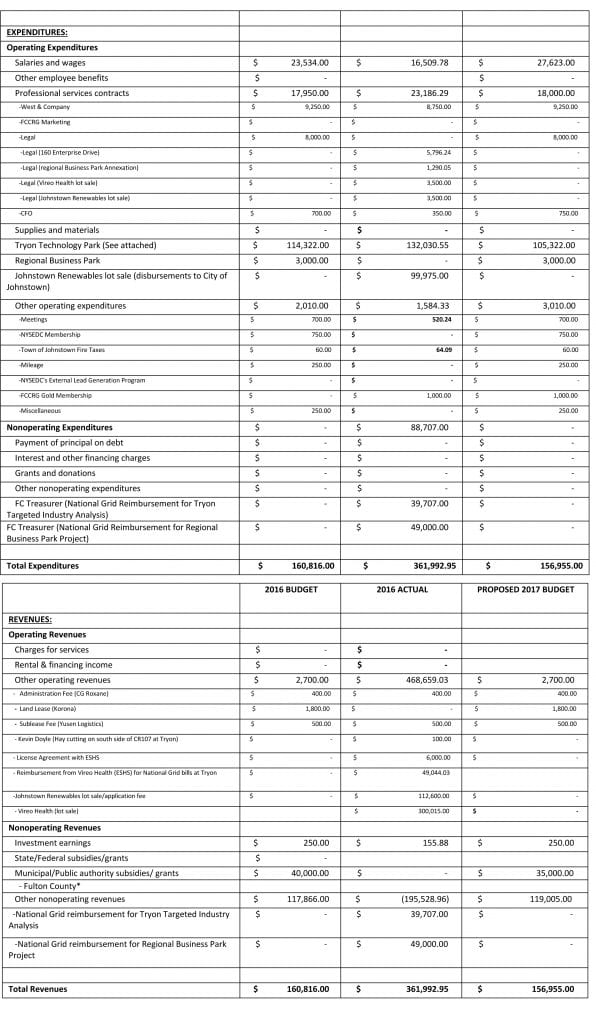 Jim Mraz presented the proposed 2017 IDA Budget. The budget proposes total expenditures of $154,066. Jim Mraz posed two (2) questions for IDA discussion. The first was regarding Building 60. He stated that he identified a line item in the proposed 2017 Tryon Technology Park budget for $2,000 for miscellaneous building repairs to Building 60. He asked IDA members if they were interested in trying to upgrade that building to prepare it to possibly lease space in that building. It was the unanimous consensus of all IDA members present to have Jim Mraz prepare an estimate of what it may cost to prepare the building for leasing.

Jim Mraz discussed with IDA members the concept of hiring a part-time summer help to cut grass at Tryon in lieu of contracting out for it. After a brief discussion, it was the unanimous consensus of all IDA members present to continue to contract out for this service.

It was the consensus of all IDA members present to increase the line item for meetings under operating expenditures to $1,400. This will allow for a second meeting to be held annually. The second meeting would be targeted to be used as a retreat, at which time IDA members would discuss ideas, plans and potential projects for the following year that could be addressed in budget appropriations. This meeting would be held annually at the time that the IDA’s budget is being prepared for a following year.

Jim Mraz stated that the IDA Board needs to act on its proposed budget at today’s meeting. He stated he needs to file the budget under PARIS by the end of October.