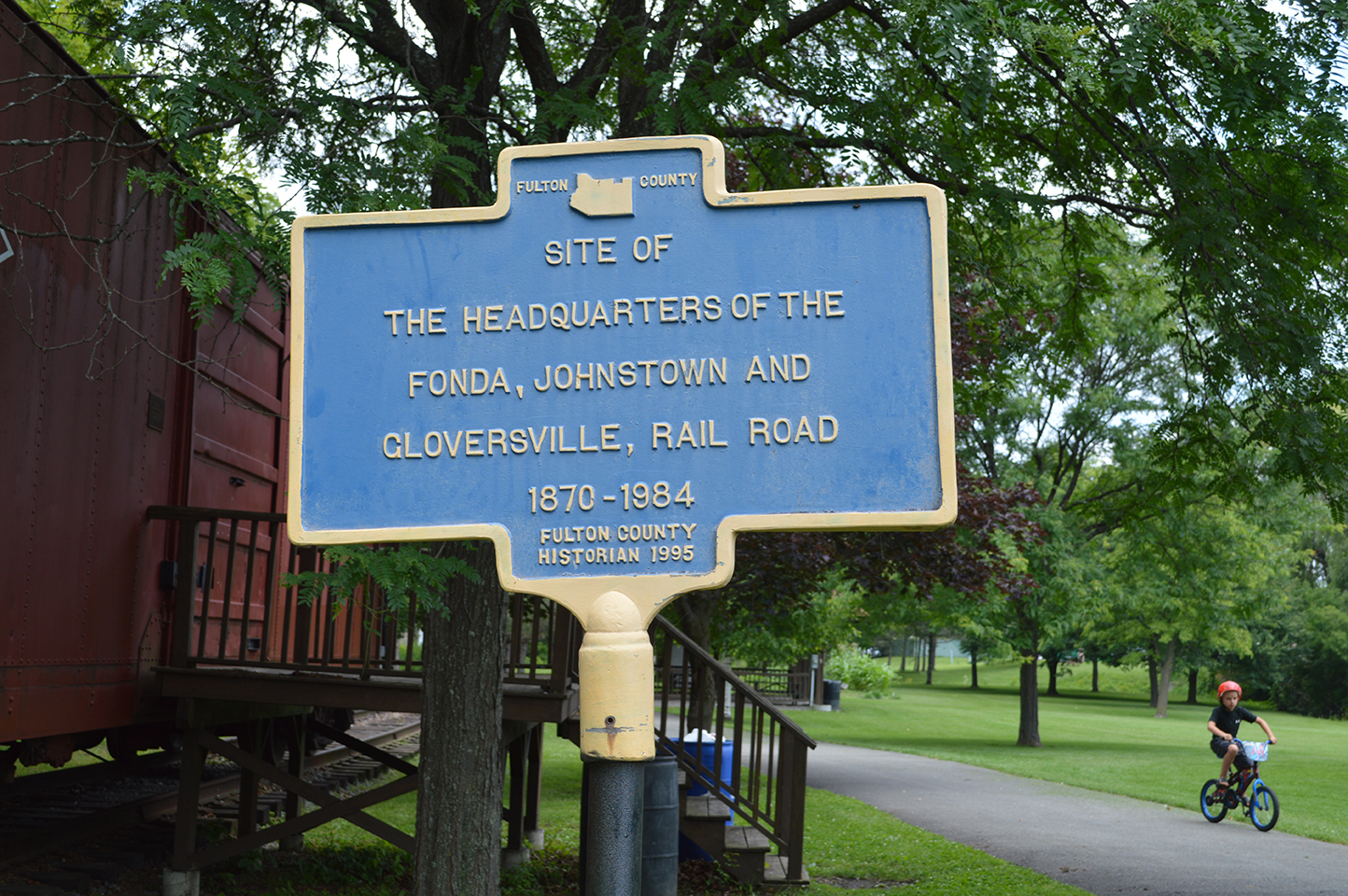 The Gateway to the Adirondacks gets wider

The Gateway to the Adirondacks gets wider

September has a lot to offer to New Yorkers who need a break from the heat and humidity.

In September, New York State is on her best behavior. Summer’s heat and humidity begin to mellow into warm but pleasant days. Blue skies and sunshine abound. Trees are just beginning put on their fall attire: flaming yellow-orange for the sycamores, scarlet for the maples. And we are all eager to get out and enjoy this perfect weather and gorgeous landscape. The Fonda, Johnstown & Gloversville Rail-Trail (FJ&G) is one of the best ways to take in all that September has to offer.

A short history of the FJ&G

The FJ&G rail-trail began its existence as the Fonda, Johnstown and Gloversville Railroad. Constructed in 1870, it opened up a national market to the renowned Gloversville and Johnstown glove factories, connecting the region with the New York Central Railroad in Fonda. Later, the line was extended to the village of Northville. The Northville depot was a convenient waypoint for travelers who wanted to holiday in rustic inns and cabins along the Sacandaga River. It was this scenic stop that gave the line its nickname “Gateway to the Adirondacks.”

Leather glove manufacture fueled the economy of Johnstown and Gloversville for more than a century, but in the 1980s, global competition and stricter regulations led to a decline in that sector of the economy. A dwindling customer base finally spelled the end of the FJ&G railroad line. However, this downturn ultimately provided the people of Johnstown and Gloversville with an opportunity to reinvent their economies and their communities. Changes in industry and in organization have led to improvements in the environment and in the lives of people who live here. Modern businesses are growing in the tracks left by old industries.

Likewise, the FJ&G is being reinvented for the 21st century.

Today, the FJ&G lives up to its reputation as the Gateway to the Adirondacks. The former rail lines have been transformed into eight miles of paved trail for walking, biking, running, skating, rollerblading, and cross country skiing. Though development began in the 1980s, right of way issues have prevented a continuous stretch of trail. However, in recent years, Fulton County has made progress in purchasing additional sections of the former FJ&G rail. This year, the county is acquiring sections that will allow the completion of the trail from the Johnstown Industrial Park down to the village of Fonda. When complete, the FJ&G will encompass more than 15 miles of contiguous trail and will extend beyond Fulton County into Montgomery County to provide access to the NYS Canal Trail, Saratoga County, and the Village of Mayfield.

Whether you’re a local or a visitor, the FJ&G rail trail offers a unique perspective on the natural wonders and quaint villages of upstate New York. Take to the paved paths this September, by foot, by bike, or by rollerblades and see all that our local landscape has to offer.